Living in Vermont not an artists’ rendition

When people think of Vermont, they may picture skiing and sipping hot toddies by the fire; you know, the classic White Christmas scene. Or, they may think of “Postcard Vermont” with fall foliage and cows dotting the countryside. What they don’t think about are the in-between seasons when one big thing has almost finished and … Read More

Springing About in Stowe

View of Mt. Mansfield from West Hill Rd. Still plenty of snow on the mountain. Spring in Vermont is kind of like a puppy trying to climb stairs for the first time. It’s slow going, maybe it will hang out on a step to catch for a little bit, and sometimes it may stumble down … Read More

We’ve always felt that Stowe Mountain Resort is a great place for skiing and riding—but maybe we’re a little biased. After all, it’s just down the road from us, calling us like a siren, singing in our ears, “Come ski. Come ride.” But we’re obviously not the only ones who believe Stowe is the place … Read More

We have a tradition at our house: every January we break out the snowshoes, have a such a great time that we ask ourselves why we don’t do this more often, then return home and toss all our gear into a corner of the mudroom, where we forget about it until the following January. Unfortunately, if you’re trying to develop a … Read More 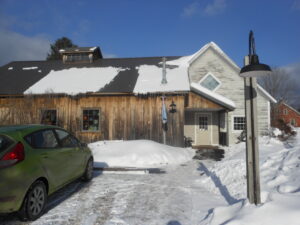 We’re back after our December break and are rested up for a new year of fun. After all the frivolity of the holiday season, you may be feeling a financial pinch and wondering about ways to tighten your belt (figuratively) so you can still get a start on buying that house or fixing the one … Read More

December is a busy time for many of us. Luckily, a friend of mine is a firm believer, like myself, that there is always time to shop for cheese, chocolate, and pewter. So we decided to investigate a local stop for tourists and natives alike: the Cabot Cheese, Lake Champlain Chocolates, and Danforth Pewter shops … Read More

A Few of Our Favorite Things

As relatively new homeowners, my husband and I have spent quite a bit of time this past year thinking about tools. Many of us acquire the basics with our first rental situation—hammer, screwdrivers (Phillips & flat-head), pliers, wrench, duct tape, and measuring tape; along with maybe a couple other odds and ends as well. There … Read More

It’s not hard to dine well in Stowe. The variety and quality of local restaurants in the area is truly impressive, especially considering its population of barely 4,300. According to GoStowe.com, Stowe has the third largest number of award-winning restaurants in New England, trailing only Boston and Providence. When you want to eat well at … Read More

It Was a Dark and Stormy Night

Most of my knowledge about haunted houses comes from my parents and mass media. For example, I remember my father taking my sisters and me for a drive on a beautiful sunny day. As we passed by a lone house on a dirt road, my father said nonchalantly, “There’s the haunted house” (where else would … Read More