Pineapple & Cor de Chasse
Posted on May 27, 2011 by Vermont Realtor

Blame it on Columbus. Well, at least the pineapple, for it is believed that he brought the first one back to Europe upon returning from his now famed 1492-93 voyages to the southern regions of our continent.

The pineapple, it turns out, was amongst the daily fare at the Guadeloupe natives’ dinner table. Though it is doubtful that they ate at a table, it is likely that they shared this and other immediately available delicacies with the intrigued and intriguing voyagers.

At a time when refined cane sugar and fresh fruit were rare and expensive commodities, the appearance of the pineapple at the table of Columbus’ contemporaries soon turned it into an item of great celebrity. It remained an uncommon, coveted commodity well into the 1600’s. In fact, King Charles II of England is said to have insisted upon posing for a portrait where he is seen receiving a pineapple as a gift; a symbol of royal privilege.

As in Europe originally, creative food displays were the main entertainment during formal gatherings in Colonial America. It was the pineapple, due to its rarity and striking visual attractiveness, which crowned the most important feasts. As the natural keystone of feasts, the pineapple came to symbolize the sense of hospitality and human warmth inherent to gracious hosts who had spared no expense to ensure the dining pleasure of guests.

The symbolism of the horn takes root in 16th century performing arts, more precisely as a commonly used instrument alongside opera signers. The modern orchestral brass French horn was an invention based on early hunting horns. During the 17th century, modifications to the flared end of the horn were made and the “cor de chasse”, or French horn as the English called it, was born.

The horn, or bugle, was adopted as a sign of the noble hunter. Consequently, it became a symbol of the chase, which was considered the most noble of employments next to war. The horn signified a person of high or noble pursuits and could be found on the coat of arms of many country estates.

As symbols of hospitality and noble pursuits, it stands to reason that the pineapple and horn should be well-suited to convey the values and standards that are so essential to the Real Estate industry. 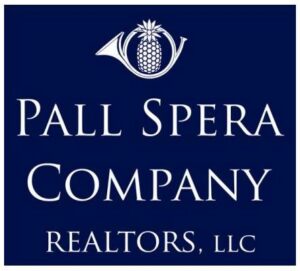