Now that the first quarter has wrapped up, we thought we should take some time and review what is happening in our market.  The first quarter has historically been the slowest quarter in the number of units sold, not just in Stowe but in Lamoille county in general. This year’s first quarter sales numbers are better than average but just by a little. 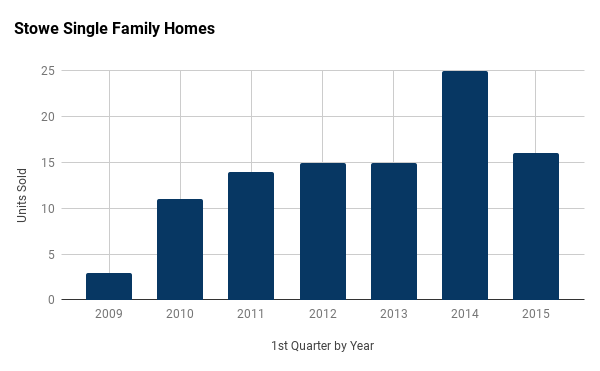 Stowe has some of the most expensive homes in Lamoille County and the highest number of homes sold in the county year after year.  In the first quarter of this year, 16 single family homes sold in Stowe.  Stowe accounted for a third of all the sales of single family homes in Lamoille County. Stowe home sales are down compared to 2014’s monstrous 25, but to say the first quarter sales are down does not paint a completely accurate picture. The average number of Stowe homes sold in the first quarter since 2000 is 13.8 per year. So 2015 is above that average, but 2014 was such an aberration that it makes this year’s above normal numbers look less appealing. Since 2000 there has only been two years that the number of Stowe homes sold exceeded 20 in the first quarter, last year and 2004.  For the past several years the number sold has been in the low to mid teens.  Looking at the number for Stowe single family homes, it is down 36% compared with 2014, but the total dollar volume for the properties is down only 31%.  Meaning the price per house has increased.  The average price per home sold is $580,000 in 2015 compared to $540,000 in 2014. 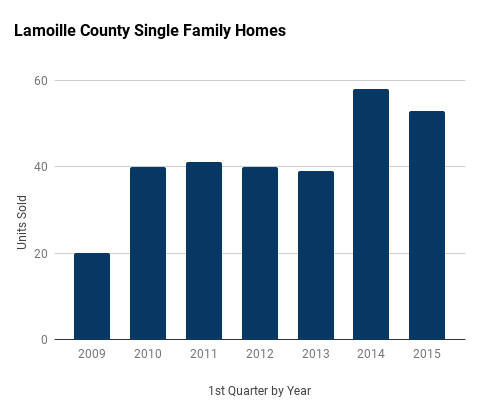 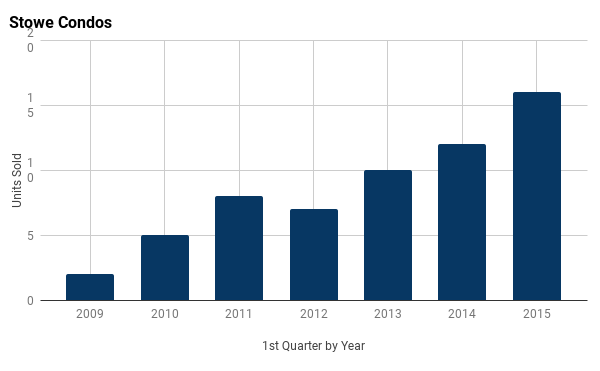 Condo sales in Stowe are up slightly due to increased activity at Stowe Mountain Resort. The new amenities have brought a surge of interest for condos on the mountain in particular. Stowe’s condo sales have increased year over year since 2012.  Last year 12 condos were sold in Stowe compared to 16 sold this year.  There were two condos this year that have sold above a million dollars.  Those sales dramatically change the price per condo figure.  Last year the average price for  condos sold in Stowe in the first quarter was about $263,000.  This year that figure is just under $500,000, taking out the 2 – million dollar condos that average is brought down closer to last year at about $313,000 but still an increase over the previous year.  Stowe condo sales accounted for 89% of all condo sales in Lamoille County in the first quarter of 2015.  So when we see variations in the graphs from the Stowe condo and the Lamoille county condo sales number, the numbers are too small to make a statement about the other towns in terms of trends.  Last year Cambridge had an abnormal amount of condo closings in the first quarter with 8, but prior to last year Cambridge had 1 sale in the first quarter from 2000-2013. 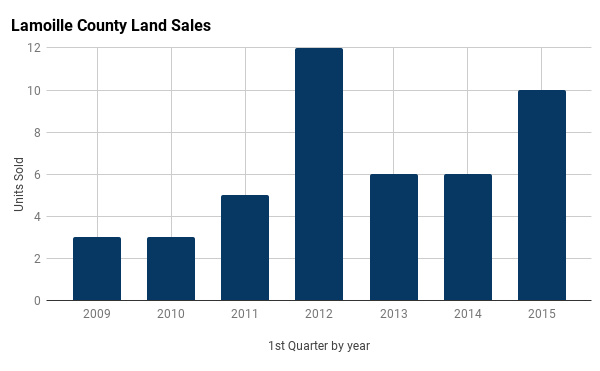 Land sales in the first quarter are always low as winter weather is a major factor in being able to explore the land to purchase.  Stowe land sales have decreased slightly this year from last year, from two to one, but the total number of land sales that happen in the first quarter are really too small to draw any conclusions from these numbers.  Land for building is reawakening in its appeal in the Lamoille County market.  The low interest rates and energy efficient building practices have buyers interested.  Lamoille County is above the average for the number of lots sold, with all the signs pointing to a continued interest in land.

The real estate market in Stowe and across Lamoille County is good and interest rates are low.  If you are interested in a home in Stowe, Vermont  or any other town in Lamoille County please contact the Pall Spera Company Realtors at info@pallspera.com or call us at 802-253-9771
Information deemed reliable but not guaranteed. Based on data available at the end of March 2015 and supplied by Northern New England Real Estate Network or it’s MLS. Neither the Association, it’s MLS or Pall Spera Company can guarantee it’s accuracy