There was a recent article in the Stowe Reporter that claims “Million-dollar homes sell at sluggish pace.”  We here at Pall Spera Company Realtors, the leader in listings at or above one million dollars in Stowe, Vermont, have a different take on the current market of properties listed at a million dollars and above.  We want to take a look at the current market but also previous years to give context to the numbers. 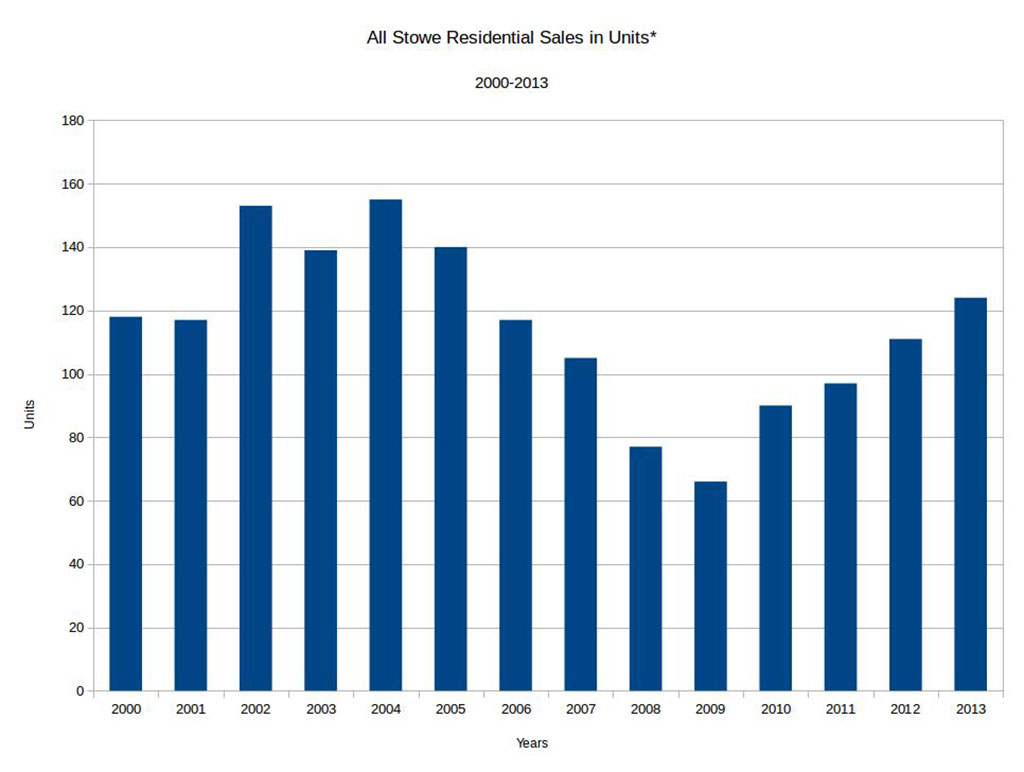 *source: NNEREN
The United State’s economy has had a great impact on the Stowe real estate market.  According to the National Bureau of Economic Research, the U.S. hit a peak in December of 2007 and for the next 18 months our economy contracted.  In June of 2009, the U.S. was starting to come out of the recession and show some growth.  The recession took place largely in 2008 and 2009.  The residential real estate market in Stowe, in both million dollar and above listings, as well as those under a million dollars, had a similar trend.  The years that led up to the recession (2002 – 2006) had some of the most activity since 1999.  NNEREN, the organization that maintains the MLS, started keeping track of data in 1999.   In the years that followed 2007, the Stowe residential housing market takes a downturn with the economy.  And just like the economy, the residential housing market in Stowe starts to recover in 2010.

The million dollar and above residential listings in Stowe had a similar path that all of Stowe’s residential listings had, with highs prior to the recession and lows in 2008 and 2009, and then rebounding in the years since the recession.  The Stowe Reporter compared the sales for million dollar and above homes from January 2013 – October 2013  (8 homes sold) to January 2014 – October 2014 (6 homes sold) and came to the conclusion that 2014 is sluggish for million dollar and above sales.   Pall Spera Company Realtors has been in business since 1969 and knows better than to look at two years and make sweeping statements of the market based on that information.  We know the market better than that.  For instance, there are 7 residential listings in Stowe which have sold that were listed for more than one million dollars between January and October 2014.  In addition to the closed sales, there are an additional 6 listings above one million dollars in Stowe set to close prior to the end of the year which, when they close, will result in a total of 13 properties sold above one million dollars in 2014 versus 11 properties sold over a million dollars in 2013. This is an 18% increase, but more importantly, we are regaining the activity lost over the past decade. 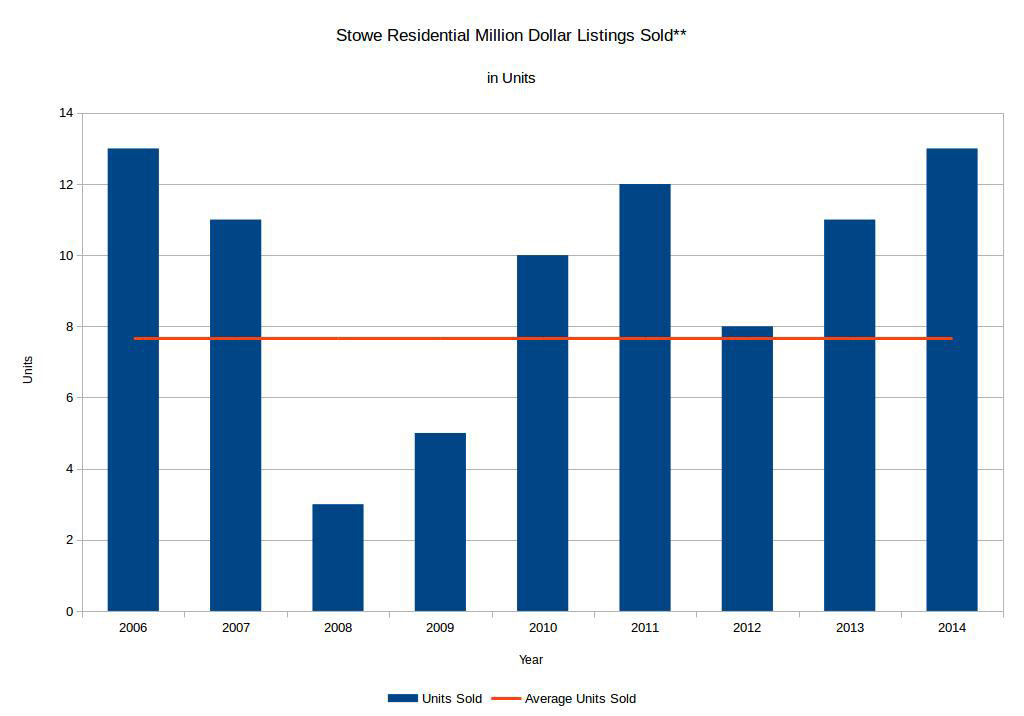 **2014 is including properties that have not yet closed but are under contract and expected to close by the end of 2014.  All data comes from NNEREN.

Now that we are comparing full years, we can see a clear picture of what is happening.  What do the numbers mean?  Nothing without context.  So, at the peak of the market, 13 million dollar and above residential listings in Stowe sold and at the height of the recession only 3 listings over one million dollars were sold.  Between 1999 and 2013, on average, 7.6 listings over a million dollars in Stowe are sold each year.  So, if 11 sales in a year is a good year, 13 will be an exceptional year for the million dollar and above housing market in Stowe.  With 7 sold and 6 more under contract, we are looking at 2014, not as a sluggish year, but a year that is equal to our highest level in Stowe since 2005 & 2006.

The real estate market in Stowe across the board is good and getting better.  If you are interested in listings over $1,000,000 in Stowe, Vermont  or other Luxury Listings please contact the Pall Spera Company Realtors at info@pallspera.com or call us at 802-253-9771